The driest city in the driest continent, that is what the say about Adelaide.  The city was named after a German Queen, who married William IV and became the Queen of the UK and Ireland.  As we approached the city we could see a brown landscape, I expected more green.  The city sprawls for miles in the horizon, there are some taller buildings in the center but the skyline is nothing spectacular.  As we approach from the north we can see the famous Adelaide Hills to our right (eastward).  On the other side somewhere in the distance is the Kangaroo Island, the island without kangaroos.

Our arrival was uneventful, the red eye flight was short and Ben only slept 6 hours during the night, he did not complain.  It took us less than 15 minutes to get through immigration and pick up, again I thought of my last time when I arrived in Chicago.  It took me more than an hour, why? 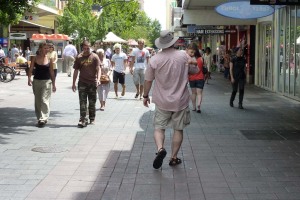 Well, we have been in Adelaide for a few days now and we are catching up with relatives and friends.  We feel a little bit like being in the movie My Big Fat Greek Wedding.  On the first night though, I met a miner from Coober Pedy.  Theio (uncle to the non-Greeks, a term we use to show respect to elder people and of course for actual uncles) Aleko has been a miner over there for over 30 years!  Coober Pedy is one of the hottest places on earth and the city is known as The Opal Capital of the world.  We will stop in this town on our way to the Northern Territory along the Stuart Highway sometime later this month. Interesting about this town aside from what most travel books talk about is that there is a big Greek community that has been active there for many decades, along with Italians, Yugoslavs.  Life there is harsh, lonely and quite; time is on a different schedule.  Anyway, the pace is slow going right now and we are organizing our time, I have arranged for a rental and we should be going to Flinders Ranges National Park and the frontier town Quorn.  Besides some family matters that we have to attend we will also be doing excursions around Adelaide and hopefully see some festivals as it is that time of the year here in Adelaide.  Towards the end of the month we will be heading out to see Uluru and the real Outback.

They are in the pool again!

Where we are staying

We are staying with Beth’s godparents in Vale Park which is about 10 minutes drive from down town Adelaide.  The suburbs here are a bit different compared to the typical US suburbs.  The houses are mostly ranch style house, there is no basement.

The lots seem to be much smaller and most of them are fenced in, in some cases with plain, ugly, metal sheets, I find that very weird and somehow depressing.  The houses are simple in their construction like in the US and unlike Germany nobody seems to even think about energy waste and eco friendly housing.  People are much more friendly than in Germany though and when you walk around here strangers tend to greet each other.  The cars are older and the contrast is especially stark cince our last station was Singapore where most cars were not older then 2 or 3 years, streets are very wide and the traffic at least here in Adelaide seems to be ok.

The Greeks that I have met here til now are very similar to Greek-Americans, they keep the idea of Hellenism alive.  The people here are more Greek than their brethren that live in Greece.  Through love and a lot of hard work they keep the Greek and especially their Pontianheritage alive.  To those of you who do not know Pontians are a distinct Greek ethnic group that lived in what is now day northern Turkey in the Black Sea area.  This is where my father’s family came from.  This love which is common to so many Greeks even in 2nd or 3rd generation in far away places is very strong, it is the fact that they miss their homeland so much that this flame alive even after 40 years of living in far away places like Australia.  Adelaide has two Greek radio stations, 14 Greek Orthodox churches and according to some estimates about 50,000 to 60,000 Greeks, that is very small compared to Melbourne where the number is well above 100,000.

I did not have the time to work on some of the videos that we took since we left home, you can watch them here.