Our last night in Adelaide

Well after a month in South Australia it was time to move on.  After all there are 6 states in total and two territories (NT and ACT), which in effect do function as States though.  We had to swap our hired car as the inspection light came on, so after sweet talking Bill the Greek in the Europcar station in center city Adelaide we got us a nice Skoda Octavia that fit us perfectly for the 800km trip to Melbourne.

Our trip to Melbourne was via the Western Highway, which is the shortest route.  It is still a long route that passes through a number of towns but it is a route that besides some pretty spots is very boring.  The only stops we made besides Murray Bridge 80km east of Adelaide to marvel at the mighty Murray river, was stops for gas, coffee and nappy changes.  The good thing this time around was that there were significantly less flies compared to

Ben checking out the naughty Hindley st. in Adelaide. The world's dirtiest McDonalds is on this street!

our trip up north.  Interesting along the route are the Grampians National Park and the Little Desert National Park as well as the city of Ballarat.  The city of Ballarat is known for spawning the victorian gold rush in the 1850s.  It is quite a large city, it is probably the largest inland city in Australia.  Unfortunately, we did not have time to stop as Beth and Ben were getting impatient to get going.

What is it about Australia, its highways and its bad drivers?  I mean Aussies are as nice and polite as they come but behind a steering wheel they become obnoxious and reckless.  It is weird because I expected it to be different, the driver’s have no notion of decency on the road.  On the other side you have these narrow two lane highways that make them perfect for horrific accidents.  Road trains do not help either, it is very hard to overtake them 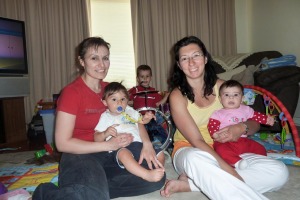 Eleni, Beth and the kids

and when you do you have to actually speed up significantly, something that the Australian police does not seem to really agree with.  Speed limits are quite low and frustrating as it takes forever going 100km/h in Victoria (110km/h in S. Australia).  The distances are so great and there is so much space I wonder why it has to be this way.

Another thing that surprised me is that 40-50km outside Melbourne from the west side there is nothing.  I expected suburbs that stretch the horizon but the cities are much more compact, there have been recent developments but there are not that many commuters that actually have to drive 40-50km in Australia.  We arrived as night set in over Melbourne and the skyline was amazing, a stark contrast to the very (in comparison)

provincial town of Adelaide.  Adelaide is quick and easy, it has over a million inhabitants but it feels like much less, it is very spacious.  In comparison when we were approaching Melbourne I thought New York and Chicago, it is not quite that big but it has a few skyscrapers and compared to where we just came from it might as well have been.  We also found ourselves to a modern multi-lane highway that also came as a surprise and not long after we came to our first mini traffic jam over the West Gate Bridge.  It was a combination of a road works and a guy who wanted to jump off the bridge, let them jump I say.  It is a weird spectacle as a drama like that unfolds a mere 10 meters away while you are in your own little world looking through a window and hearing no sound.  I do not know what happened but then I could not just stop and watch.  We finally made it to Hawthorn, a suburb of Melbourne

My BBs, taken in Murray Bridge

about 7km from the CBD and according to Wikipedia a very expensive one.  It has a population of about 20,000 people and it is very close to the city.  We will be based here for the rest of our stay in Australia.  We will explore Melbourne its surroundings, Sydney, Cairns and the Great Barrier Reef in the next few weeks. 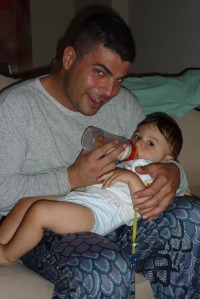 Kyriakos, Beth's uncle and our host in Melbourne feeding the little man.

He enjoys water so much!

Our friends in Adelaide